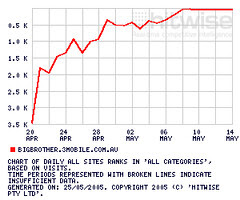 Hitwise BB05 Stats - 25 May 05
Originally uploaded by rufan-redi.
The widespread appeal of the latest instalment of the Big Brother series is further illustrated by its considerable online impact. After one full week of screening, Big Brother Australia became the 18th most frequently visited website by Australian Internet users and the most popular 'Television - Programme' website with a market share of 55% as of the week ending May 15. Page Impression data available for the same period suggests that bigbrother.3mobile.com.au accounts for almost 1% of total Australian Internet activity. Although the websites popularity appears to be stabilising this week ranking 21st overall, Hitwise expects the website's market share to spike as key events unfold in the unscripted drama.

The most popular search phrase employed by website visitors was 'big brother', accounting for 36.62% of all search terms that delivered users to the website. 74.64% of searches used a combination of two or three search terms. Google Australia (www.google.com.au) delivered 58% of search engine traffic to the website, while Yahoo! Australia & New Zealand Search (au.search.yahoo.com) accounted for 13% and relative newcomer ninemsn Search (search.ninemsn.com.au) provided the site with a further 11%.

so, who's trawling for spam today ?

Spam is a funny thing. No-one really wants it yet it still keeps turning up. It may be selling V-i-a-g-r-a or phishing for our credit card details or (my favourite) anti-spam services and we (hopefully) delete it straight away (or better yet, report it to SpamCop).

Spam works because they seem to have a robot army as large as the Google web crawlers just out there looking for idiots who post their email addresses in public or sign up with companies who they know nothing about - and never read their privacy policy (and then wonder why they get swamped with spam).

The good folks at ProjectHoneyPot are hoping to add accountability to the various spiders and spammers by seeding tracable email addresses. I've installed HoneyPots on a number of sites I work on with some interesting results. Every little bit helps !

Of course this doesn't help protect you from the friends who don't know how to protect their machines yet include your email address on every funny email they send out (haven't you heard of mailing lists and BCC yet guys) - all it takes is one of those to get an infection that trawls for email addresses to share with the spammers... (don't get me started on why everyone without an active and up-to-date firewall and anti-virus installation shouldn't be allowed on the web !)

There are some very good services that offer 'disposable' email addresses. My personal favourite is SneakEmail - they allow you to set up multiple forwards and tag the generated email address with when you created it, why you set it up and where you used it... the if someone spams the address just throw it away (and never do business with the site you used it for again !). You can trial it for free or pay for a (very cheap) subscription to help support the service.

SpamCop, mentioned above, offer a fairly complete service - a filtered email account that you can access via POP3 or IMAP4, and that is able to suck mail in from your existing accounts. It cleans your inbox using several blacklists, and helps automate the process of reporting complaints to ISPs hosting the spammers (sometimes they even listen !)

Bluebottle offer a different solution by only allowing mail through to you after a user has responded to a challenge (only once - if they jumo through the hoop the first time mail is clear to get to you, or you can pre-approve them by sending a mail to them from the Bluebottle server or giving them a secret PIN to include in the subject line of the first email they send you). Some people don't like the idea of generating challenge-response emails but if your mailbox is out of control it can help reduce your problem (although Joe Job victims suffer).

You can also spoil spammers days by using an anti-phishing toolbar - stops you falling into one of their traps.

Hopefully the moves to provide assured safe email frameworks will reduce the problem... but for now.... you need the tools to fight back !
Posted by Offbeatmammal at 18:45 No comments:

it's all pretty phishy

If you're scared about accidentally giving out your electronic banking, PayPal or eBay login information by visiting a fake site (although if you're silly enough to click on a link in an HTML only email with dubious spelling then perhaps it's for the best), check out the Netcraft Toolbar - it gives you an instant rating on the site, and your reports can help others. Only available for IE but Now available for IE and Firefox users (and hopefully other browsers soon), the information is being made available to other systems so hopefully over time we'll see this sort of protection becoming more ubiquitous...
Posted by Offbeatmammal at 13:41 No comments:

Netscape 8 - an end to the Browser wars ?

After a considerable drop in profile thanks to being cast adrift in an uncaring corporate environment, and a failure to actual produce any relevant product while Firefox surged from nowhere to the the pre-eminent IE competitor... Netscape is back.

Netscape version 8.01 has just gone GA and it's a very interesting product. A tabbed browser a la Firefox and some of the IE bolt-ons (e.g. Maxthon or AdvancedBrowser) coupled with some interesting usability and security enhancements and a very handy dual-rendering capability (so you can switch between IE and the the Mozilla rendering engines at the tap of an icon).

Sadly the reality is a little disappointing. While the rendering toggle is a time-saver for testing it's not enough of a killer feature to make up for some of the short-comings in the actual browser (and it doesn't actually help if you're halfway through a series of form submissions as it tried to re-submit the page, rather than re-render the already available HTML).

The biggest disappointment is that the product simply seems unfinished and clumsy. While that is something which a point release could easily remedy it is not what Netscape have been traditionally been adept at doing, preferring instead to stuff more features into a product to try and hide its deficiencies.

The use of tabs is less elegant that in the native Firefox or Safari with empty tabs being ignored in favour of creating new ones, and the cursor not being positioned on the address field when one is created. Switch between tabs often leaves the browser confused, displaying incorrect refresh icon and status and often forgetting what it was loading.

The bookmark / toolbars are an excellent idea, but again faulty and counter-intuitive. I'd expect to be able to simply drag bookmarks or functionality to the toolbar and have it available, but it seems that unless I follow slightly esoteric rules I end up putting items on other toolbars.

The per-site security settings, rendering options and auto-login are great, and make life a lot easier and I hope they continue to improve without becoming clumsy, but they sadly seem to clash with the Webmail auto-login functions (another great addition but with the feel that it was built independently of the auto-login)... It's fine if you don't have auto-login set for a webmail account but woe-betide you if you have two Hotmail or GMail accounts.... it will be quite insistant on logging in to only one of them !

Addition of a built-in search engine shortcut and a number of features you would normally find of third-party toolbars is handy, but you also loose some of the flexibility, customisation and control - again, hopefully they will provide more user input to how things appear.

The lack of Linux and OSX ports is annoying at the moment (and after all the IE rendering is pretty much redundant on those platforms) but it would have been a nice touch to take a little longer fixing up the problems in N8.01 and releasing a really slick product on all three platforms concurrently.

It will be interesting to see how much slicker the previews of IE7 are when they launch - if it renders pages so they are as standards compliant as Firefox (or better, as they will render the de facto MS extensions as well !) then once again Netscapes claim to fame will be brief.
Posted by Offbeatmammal at 11:26 No comments: 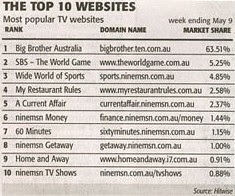 BB05 Website Stats
Originally uploaded by rufan-redi.
For the first week on a new site it's nice to see it storm the charts. Not without a hitch but pretty much stable and well behaved. Peaking well over 5000 page impressions a minute and sustaining 2 million plus impressions a day with peaks of 6000 concurrent web streams. Very happy with the site this year ;)
Posted by Offbeatmammal at 19:03 No comments:

okay, well maybe I don't hate CSS, but I really dislike the completing implementations and the work you have to do when putting together a marginally complex page and making it work for everyone.

I like IE6 and it's strict mode - saves so much time over trying to build alternate style sheets for different browsers and platforms but even so it's not perfect. There are a few issues specific to strict mode... which of course disappear in quirks mode... which gives you back the original problem.

It's enough to make your head hurt.

Back in the pre-CSS days it was easy. Expectations where lower and if you couldn't make a layout with table cells and background images that was fine. And it pretty much worked in any browser.

Now CSS has started to set the bar a lot higher but the inconsistancies with interpreting the standards causes no end of trouble.

And rather than try and make sure that the newer arrivals support the existing de facto standards and help move things forward from a user perspective they crow about how compliant they are (and I have to point the finger more heavily in the direction of Firefox, Netscape 8 and Opera than the incumbent IE - admittedly because IE hasn't had an upgrade in the sme timeframe of the others)

Maybe with the advent of IE7 (which is promising great things of CSS2 support, alpha blending and general PNG implementation) the landscape is going to take a turn for the better. But even if it is a totally perfect implementation there will still be a need to support the lame ducks (even though on one client site which gets over 2 million page impressions a day, on a slow day the non-IE traffic comprises less than 4%) and compensate for deficiencies in the ivory tower created standards (see - it's true, you can't please all the people all of the time !)
Posted by Offbeatmammal at 21:00 No comments: