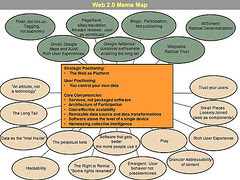 web 2.0 meme map
Originally uploaded by rufan-redi.
Riding in on a tsunami of blog posts, inaccurate wikipedia entries in Klingon and Flickr photosets of the latest del.icio.us meme to make the front pages of the Fourth Estate comes Web 2.0.

A marketeers dream of what venture capitalists want now that they've recovered from the '00 crash where the masses do all the work and then the mailing list gets bought by Google|Yahoo!|Microsoft|Murdock and the perpetual beta (which I can only hope means that old chestnut of continual improvement that old skool developers like me where brought up to believe in) suddenly stops being driven by a caffeine fuelled bright social engineers and falls instead under the remit of the iced-strawberry-mochaccino-latte drinking folks with deck shoes and no socks.

Apparently the use of an immersive Ajax experience driven collaborative interface gives the sensation of deep and meaningful interaction with the underlying paradigm of the communications metaphor. Or something like that.

Sure, it's neat and finally it's about using the technology to actually reach out and communicate, connect and empower people but it's an evolution that's reached a tipping point, and we shouldn't be suckered into thinking it's a revolution.

Don't get me wrong. I think Flickr, del.icio.us, Flock and GMail are all huge steps in the right direction for making the web a much more friendly and user-accesible place but even within the Google properties there's still a lot to be done to bring it even to the level of a Windows or OSX desktop application (with the collaberative aspects of the best groupware apps). Then the bragging rights can really begin.